The typical advertisement call is a mellow, 4-note hoot, “boop boop bee doop”. Both Males and Females use it as a territorial call and mate-locating call. During territorial disputes, they give a more excited version of the call. Other calls are the “series location call”, a series of 7 to 15 boops, given during disputes and/or calls between paired Rebobs. A “screech series” of 3 to 7 loud, rapid screeches, is usually given by the female during territorial squabbles, and then there is the “Yoooo hoooo, boys!” nest call given during the pre-nesting period. Other sounds given when alarmed include grunts, groans, and chatters. The female often emits a loud “co-weeep” to contact her mate. 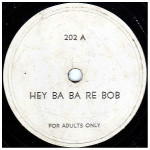